Ringwood School’s drama department has been working in partnership with The National Theatre and Chichester Festival Theatre to present a brand new play called ‘Flesh’ written by Rob Drummond as part of the National Theatre Connections Programme.   With their help and guidance, Ringwood School’s cast and crew gave it their all and delivered a confident and engaging performance at the Alexandra Theatre in Bognor Regis on Friday 5 April. 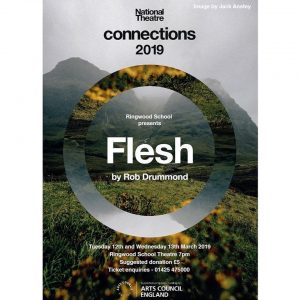 Flesh by Rob Drummond, performed by Ringwood School
A group of teenagers wake up in a forest with no clue how they got there. They find themselves separated into two different teams but have no idea what game they are expected to play. With no food, no water and seemingly no chance of escape, it’s only a matter of time before things start to get drastic. But whose side are people on and how far will they go to survive?

Take a look behind the scenes as the drama team and students prepared for the show: